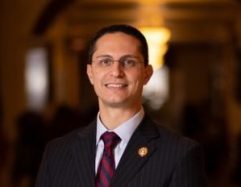 Joseph A. Lagana practices in the areas of civil litigation, redevelopment and health insurance arbitration.

In addition to his active practice, Joseph serves as a New Jersey State Senator for the 38th legislative district.  He is a member of the Senate Judiciary Committee, Vice-Chair of the Senate’s Labor Committee and a member of the Health, Human Services and Senior Citizens Committee.  Prior to joining the Senate, Joseph represented the 38th legislative district in the New Jersey Assembly, where he served on the Assembly Financial Institutions and Insurance, Judiciary, and Appropriations committees. He also served his community as Council President in the Borough of Paramus, sitting as Chairman of the Budget Committee and Labor Negotiations.